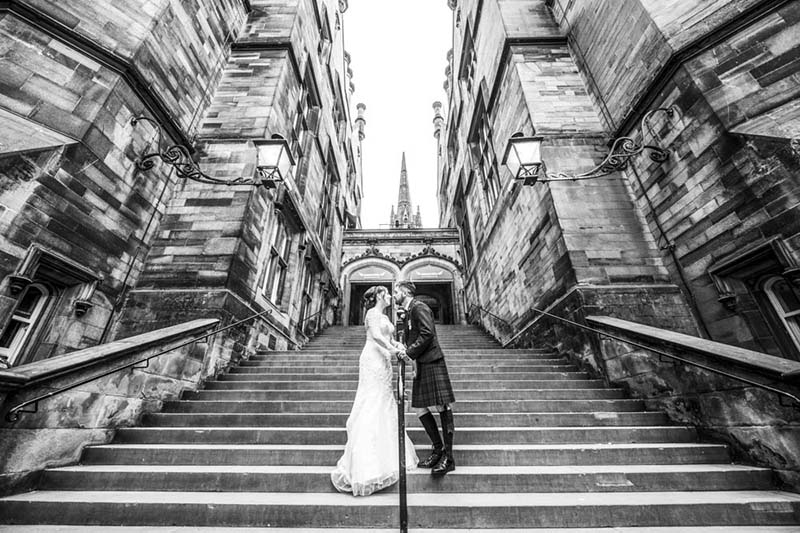 Double Tree Hilton Edinburgh Wedding. Last month I only photographed the one wedding but it was a really great wedding. I was referred by a friend I used to work with and after a really quick but funny meeting I was booked for Nikki and Daniel’s wedding at the Double Tree by Hilton Hotel in Edinburgh’s popular Grassmarket area.

A few years ago I photographed a wedding reception at the Double Tree Hilton but at that point the hotel was called the Point Hotel. I’ve only seen the one suite at the Double Tree Hilton but the highlight of the hotel by far is the fabulous penthouse, where all the functions take place, that has full panoramic views of Edinburgh Castle and the surrounding area. Every time I visit the hotel I literally say “f*ck me, that’s an incredible view”.

Nikki and Daniel didn’t want preparation shots as such but they did ask I pop into The Chanter, which is a family friendly sports bar this sits next door to the Double Tree Hilton. I knew from before the wedding Daniel would be nervous about his speech but when I saw him he was absolutely petrified. Funny thing for me is he served in the army and literally went to war but his speech scared the life out of him but he actually did a really good job.

I arrived around 1 hour before the ceremony and spent maybe 20 minutes inside The Chanter. Afterwards I went to the venue, met the videographer they hired and photographed guests arriving. The videographer works for an industry scumbag who I won’t name but he was great to work with and a truly nice guy to talk to. He made my day a lot easier for having his company. The Double Tree Hilton penthouse is a really interesting space to photograph. When photographing from the window it’s awesome, so much light and super easy to shoot but the huge window causes massive backlight problems but I’m really happy with the way the photos have turned out.

After the ceremony we headed out of the hotel for around an hour in which time we went to a few locations around Old and New Town. Old Town was absolutely mental busy as the Fringe Festival was on but the spots we went to by and large missed the tourists.

We took some photos down in Princes Street Gardens by the gardeners cottage and it was super funny. There were a group of ladies having a very loud drink just opposite where we were taking the photos. Often those kinds of people can be annoying but they were really funny and got Nikki and Daniel laughing which was great for the photos.

Nikki absolutely loves Arnold Schwarzenegger. Last year there was a black tie event at the EICC where you could have “An Experience with Arnold Schwarzenegger”. At this event, which I didn’t go to but would have loved to but couldn’t etc etc, Arnold would do a talk and auction off some of his movie memorabilia. If you paid enough you could actually meet him in person and I believe the price was around £1500 which Nikki (or Daniel) actually paid.