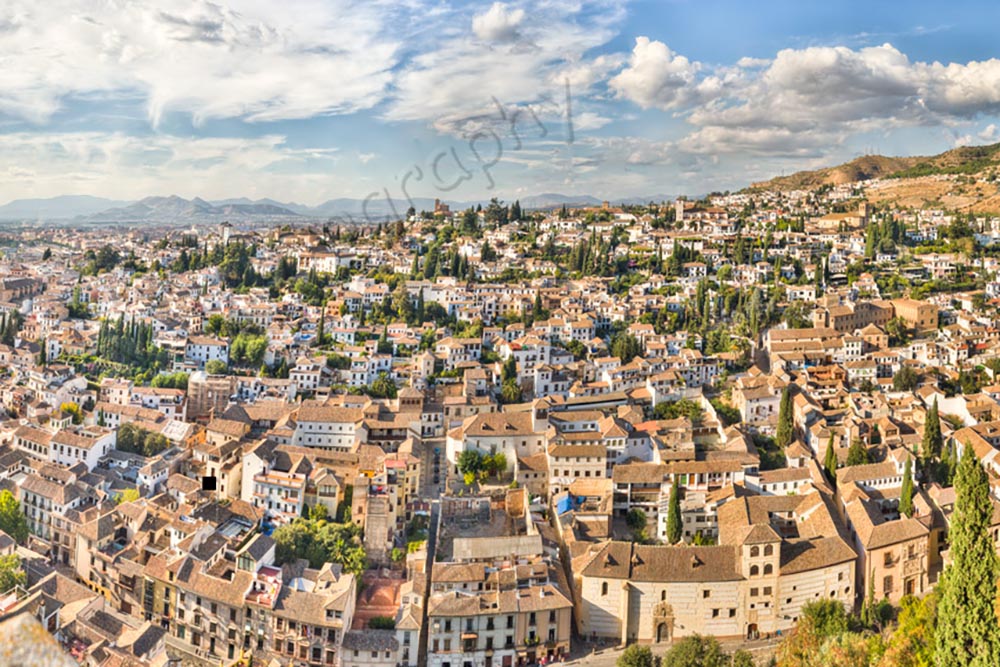 Granada as mentioned in the previous post is an absolutely stunning city. It has a lot of Moorish architecture but still has a Spanish look and feel to it. I enjoy taking single photo landscapes but my favourite kind of non-wedding or portrait photography is panoramic photography.

We were only in Granada for 3 days but I still managed to take some panoramic pictures. Each one will have a description but I have also included a photo of my panoramic setup which might be of interest.

The above was taken in the gardens at Alhambra. Granada was great as it’s really bright and really hot so I took this hand held. It’s pretty sharp throughout. 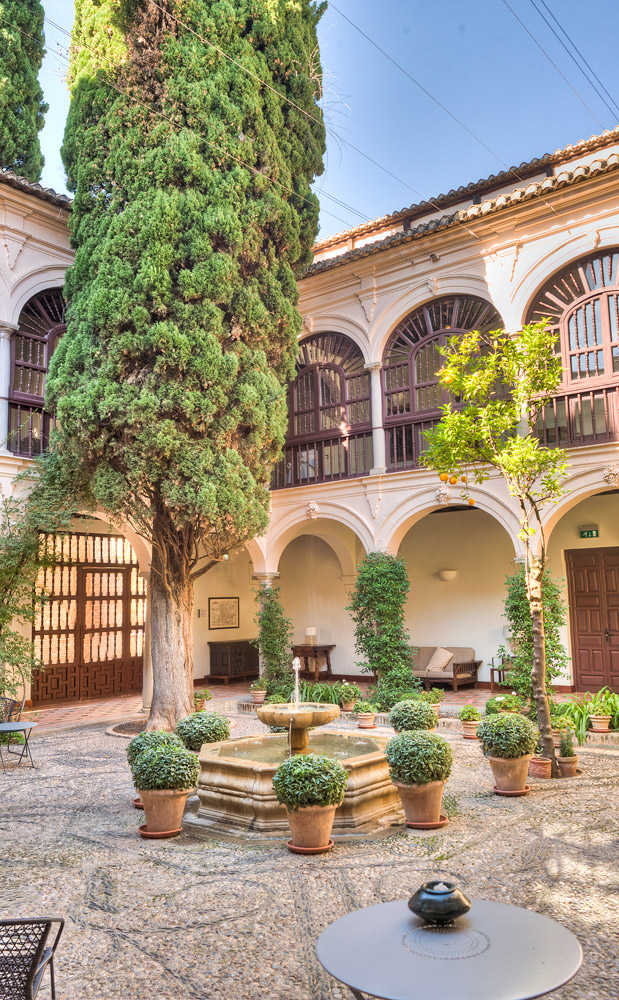 In Alhambra there was this delightful courtyard which serves as a visitor’s centre and a tearoom. I have a thing for vertical panoramics and I was too hot to setup my tripod so I did this handheld.

The panorama above is of Charles V Palace again at Alhambra. I saw a picture like this on wikipedia which I wanted to recreate and I got something completely different, which is both good and bad. This is a handheld panorama taken with vertical pictures stitched together and while it’s sharp and straight enough it’s blown out on the left side in terms of exposure. There was no point trying to do a tripod panorama as it was far too busy.

One of my favourite photos from Spain. This was taken just as sunset was starting on top of the castle at Alhambra. The three main things I wanted to ensure were in this photo were Granada Cathedral (on the far left), Albaicin in the middle and the surrounding mountains. This was taken on a tripod and the native file is around 27000 pixels. I’ll be getting this printed big very soon.

Alhambra from Albaicin. The weather was absolutely stunning on the day I took this and I wanted to take a really wide photo with Sierra Nevada, Alhambra and part of the city in the picture. We laughed while we were taking this panorama. Liv stood in the shade as it was really burning hot but some locals kept coming up to us asking if we wanted to buy marijuana for “10 euros”. I have no interest in using drugs but it was funny. We did however meet a really nice couple from Sheffield.

I believe Granada has a number of Moorish baths but the most famous one is the one taken in the panorama above. We went here once with Lorenzo and took some still shots and the next day when Liv and I walked up Albaicin we came back here to do a panorama. It was lovely and cool inside and the main room above is really beautiful. Really like this place and next time we go back to Granda we’ll go here again. 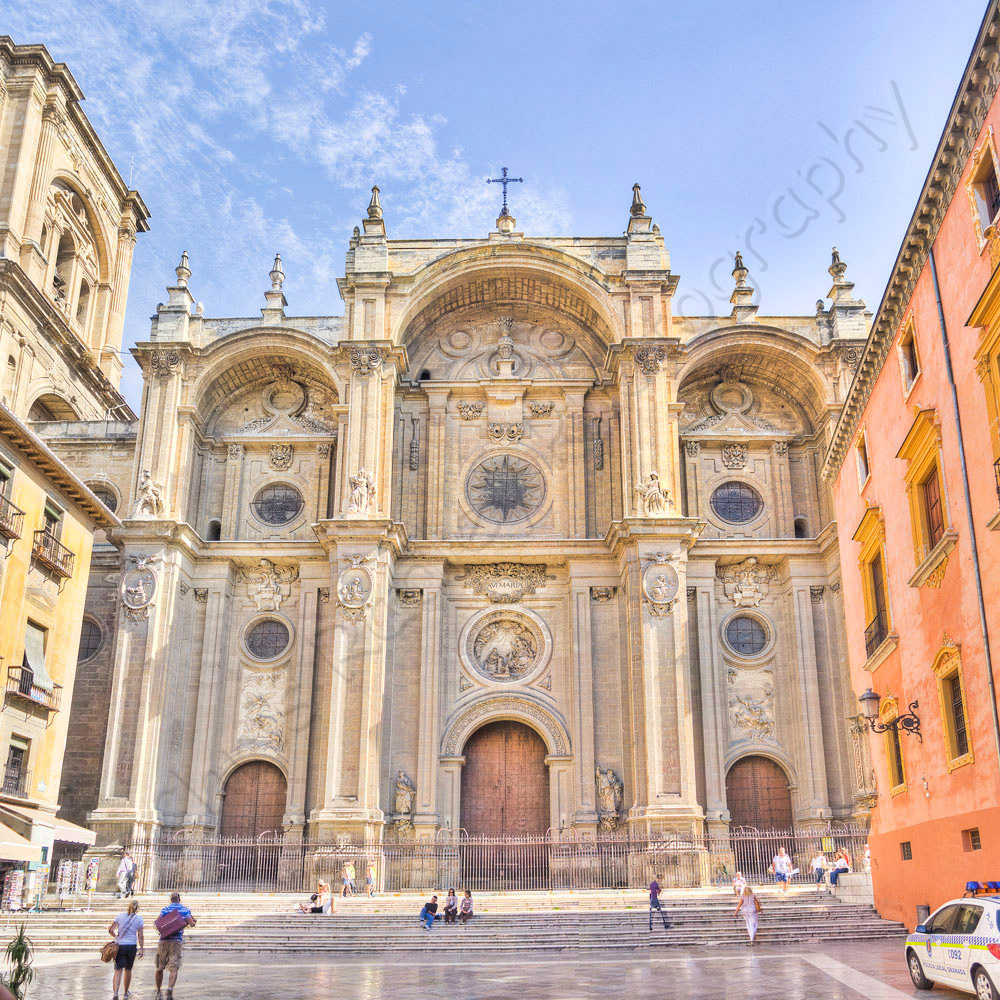 Granada Cathedral is quite simply stunning. This is another handheld panorama that I took and I think it works quite nicely. I would have liked to have gone back here first thing in the morning to take another panorama with less people around but this wasn’t going to happen. I love taking tripod panoramas but at the end of the day I’m on holiday and I’m trying to take a break. Next time we go back to Granada we’ll stay a bit longer than we did this time and I’ll take more proper photos.

This was taken on the walkdown from Albaicin to the town centre. I took this panorama hand held once again as I didn’t have my tripod with me (trying to have a holiday after all) but it shows what a normal street looks like in Granada. 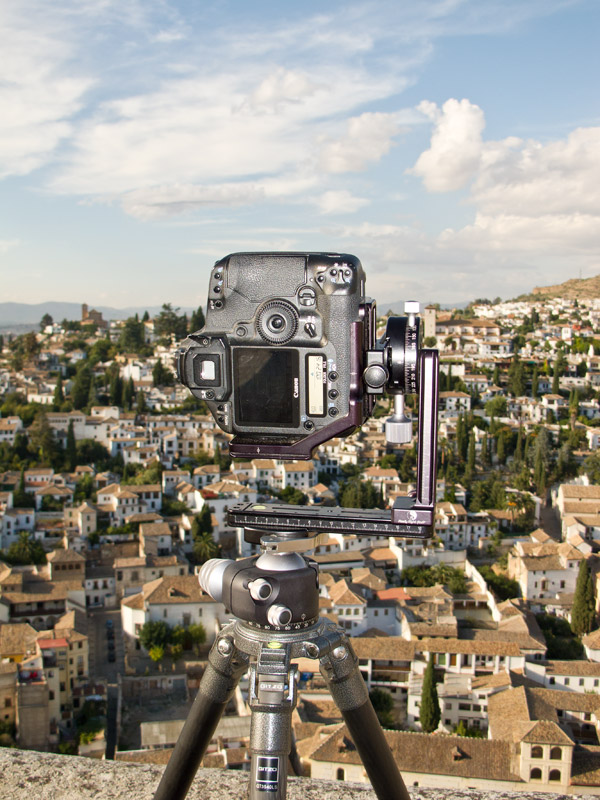 The above gives you an idea of what my panorama setup looks like. All horizontal panoramics are shot in portrait format while vertical panoramas are shot in landscape format. Both handheld and tripod panoramas share the same method but of course quality can be much improved with the tripod. I can control DOF a lot more, shoot with mirror lockup, everything will be straight and of course I can shoot at much lower ISOs. But anyway, for reference I used my Canon 1d mk3, RRS pano kit, RRS BH-55 ballhead and Gitzo Systematic tripod.

Please click on each photo for a much larger photo.