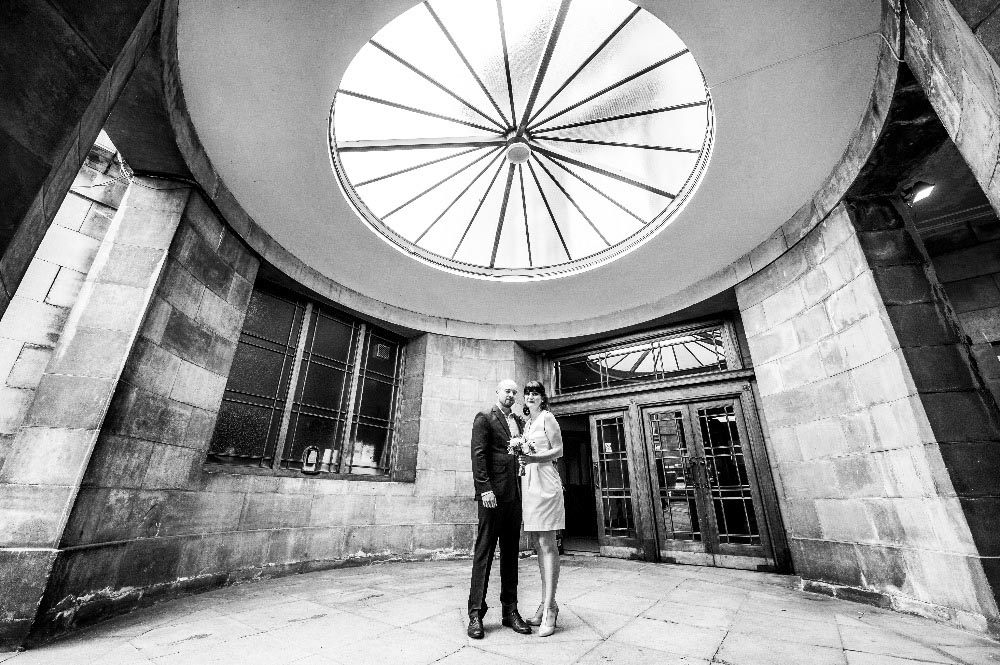 Leith Registrars Office Wedding. This June I photographed 31 Airbnb properties, a pub relaunch for All Bar One on Edinburgh’s George Street, took photos for No 1 The Grange and I’m in the process these two weeks of photographing whole menus and site shots for three really popular restaurants in the city centre.

I also photographed a couple weddings. One was for Alayne and Kevin who flew over from Florida and got married at Edinburgh Castle and then did a small photo tour around Edinburgh for the wedding photos. This was a lot of fun and the photos look awesome but I haven’t finished editing them yet. The other wedding was this really short wedding for Cara and Graham that took place at Leith Registrars Office.

I’ve lived in Edinburgh for 10 years now and I’ve photographed many dozens of weddings at Lothian Chambers but never Leith Registrars Office. Now Lothian Chambers has gone people are looking at alternative venues and one great venue is Leith Registrars Office. On the day we were limited by two big factors, one was the Hidden Doors festival and the other was the weather. I arrived at the venue 20 minutes before the ceremony and literally I just parked up and it started raining. Leith Registrars Office has a really delightful passageway outside which is great for photos but this was taken up by the Hidden Doors festival so we decided to shoot the ceremony, a few couple’s photos afterwards then call it a day.

I’ll be working with Cara and Graham again this September at their wedding reception at The Rowantree and we’ll do another shoot to make up for lack of couple photos. If you want to read more or see more photos from this wedding you can check out my wedding website Joyful Weddings about this Leith Registrars Office Wedding.

So other work, I’ve got absolutely tonnes of Airbnb property photos to share in the next couple of weeks and lots of food and event photos.