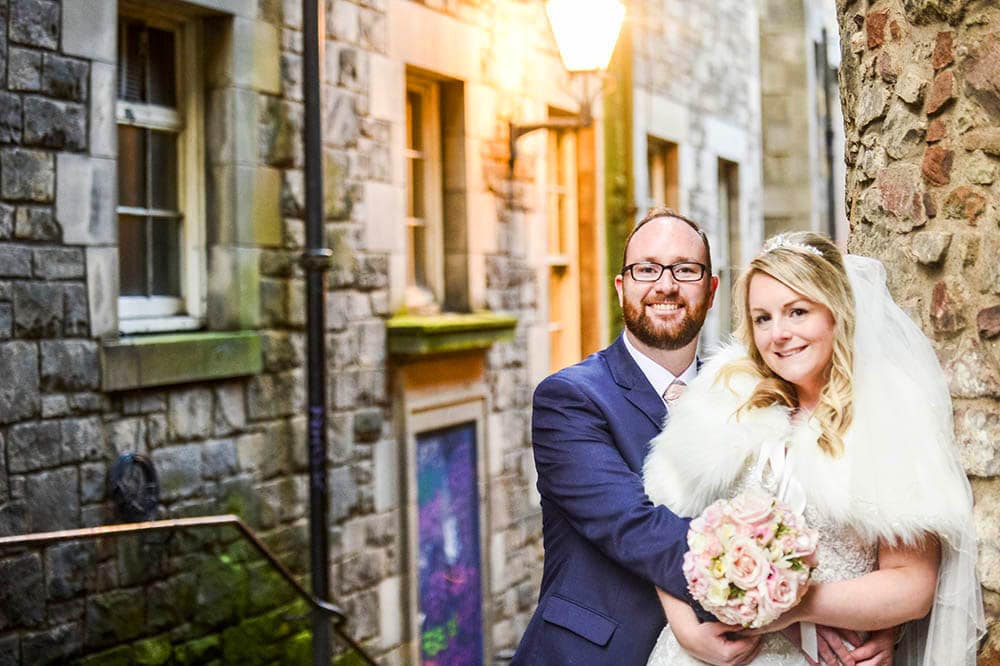 Ellie had quite a few ideas about the photos she wanted capturing on the day and she in fact created a Pinterest board with ideas, many of which came from photos I had taken before. I photographed her wedding in a different way to normal. Her ceremony was around 2pm but because of the daylight (if starts to get dark around 2.30pm in Scotland during the winter), we decided to do most of the couples shots before the ceremony with the exception of a passageway down the Royal Mile and a spot by St Giles where it would be dark but the lighting would add to the photos.

I’ve posted the photos in the order of the day, so couples shots before, a couple group shots before the ceremony (we also did loads after but these are smaller family shots) and finally the photos we took in the spots mentioned above.

Ellie and Joe were a real pleasure to work with, an absolutely lovely couple, very easy to work with and as is the case with a lot of the weddings I photograph nowadays, my time was short with the party but I had a lot of fun and do love shooting these smaller weddings.

Other things that are going on. Well I mentioned last time I wrote on this site that we moved home. We’re finally unpacked but still busy decorating and with it being an old property quite a few things need doing. The front garden is an absolute dump, it looks like no-one has touched it in years so as soon as the weather improves we’re going to tidy it up. We already love this flat and both Liv and I see us living here for a few years so we’re going to put some real effort into this place.

I’ve finally finished my first semester of college. Before Christmas I was updating this website every four to five days but again with the house move, my photography work, website developing work as well (more about this in the near future), the Christmas break and everything else I simply haven’t had the time to do anything. But that’s going to change, I’ve got a lot of things going on with my photography work, lots of weddings to put up here and I’ve got more shoots with Made coming up and various other updates coming.

Finally back to Ellie and Joe’s wedding. I’ve put quite a large amount of photos in this article partly because it was my last wedding of 2016 but also because I love so many photos from their wedding. Hope you love them as much as I do.