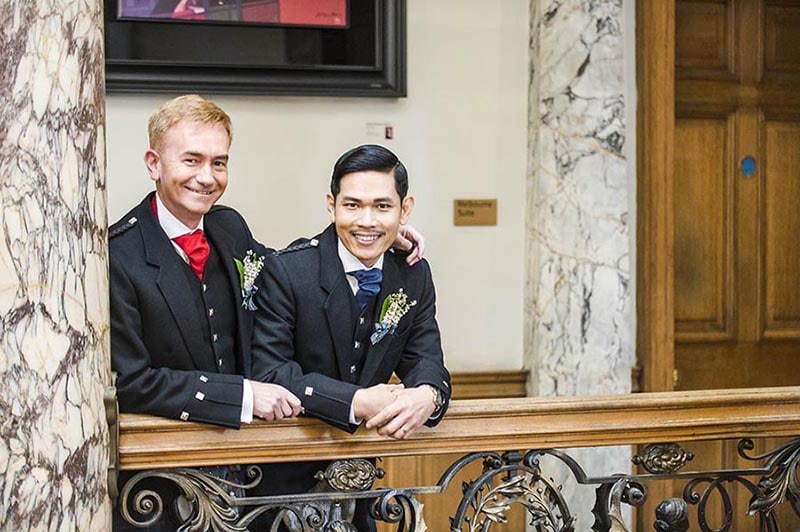 Lothian Chambers Gay Wedding. It’s really funny for me how I won’t visit a venue for a wedding in a year then suddenly I will visit twice in a really short period. In this case I visited the same venue, the G&V Hotel in Old Town, for the first time in around two years and I went there twice in a 24 hour period.

Another thing that was very similar between both weddings is getting paid beforehand. Both wedding couples knew people that had horror stories with photographers (photographers being paid and not turning up) so they were both apprehensive about paying but as I say to everyone, look at my website, see how many weddings I’ve photographed (200+) and really don’t worry. I’ve never been late to a wedding and I’ve never not shown up.

But to the wedding itself, it was a fairly decent sized wedding, around 30 people in total and it took place at the ever popular Lothian Chambers. The wedding ceremony itself was short but sweet and there were loads of great faces to capture before, during and after the wedding. Following the wedding we went into Old Town, took photos in a couple different locations then headed over to the G&V Hotel.

This was the first time I had been to the G&V Hotel in a couple years and since then the ownership had changed from the Missoni to the G&V. Inside I couldn’t see an awful lot of difference but it’s still a really great venue in a perfect location. Inside the G&V I took photos of people mingling, the cutting of the cake and then I took photos of the speeches before the meal.

Both Peter and Nor were a pleasure to work with on the day, very easy to work with and took direction perfectly when I asked them to do something for photos and this was my first gay wedding in a couple years but was really great. Everyone was lovely, the wedding was short and sweet and everyone seemed to really enjoy themselves, including myself.

Here are some of my favourite photos from the day.