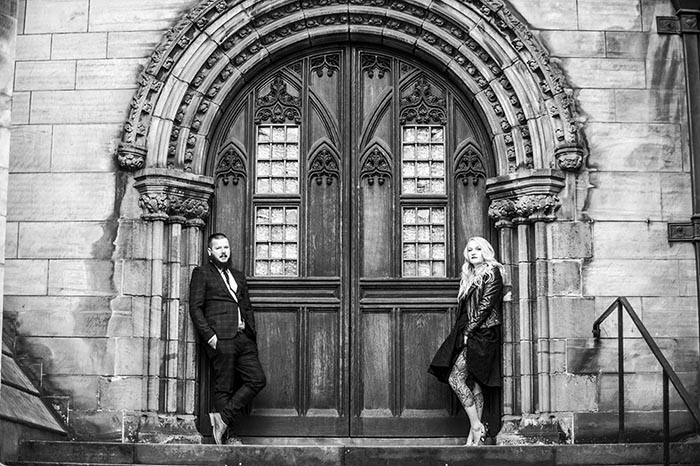 The last wedding I have to share for 2016 is this really interesting Lothian Chambers McIntyre Suite Frankenstein Wedding. Why is it interesting? Well the couple came up from Wolverhampton which is close to where I lived for almost nine years. I lived in Birmingham between 1999 and 2008 and when I studied photography my course was accredited through the University of Wolverhampton, so we used to pop over there sometimes and I became at the time reasonably familiar with the city.

Some reports say Wolverhampton is one of the worst cities in the country and sure it’s nowhere near as nice as Edinburgh (few places are) but I liked the pub scene in Wolverhampton at least. Never had a bad night out there but the city itself, and bare in mind I haven’t been there since I moved away so it may have changed, was pretty awful.

So it was pretty cool to reminisce with Frances and Daniel about Wolverhampton, Birmingham and the surrounding areas. One thing for sure is I would like to visit Birmingham again to see how the city has changed since I moved away. I used to live right next door to New Street Station which pardon my language but was an absolute shit hole but the new station looks cool and apparently there’s a tram system there now. Also Birmingham had a really fantastic Christmas/German market so I may drag the family down there this Christmas.

But back to Frances and Daniel’s wedding, they really hated having their photos taken, like really really hated it. But fortunately you can’t tell at all and after some chatting and me being my normal daft self they really loosed up and towards the end of the shoot seemed really relaxed. They only booked me for one hour so we took photos inside Lothian Chambers followed by a few photos around Old Town. They’re both really into their heavy metal/gothic thing as well (huge heavy metal fan myself so cool to that) so they asked if they could have some photos taken outside Frankenstein’s on George IV bridge.

I haven’t been in Frankenstein’s yet myself but there is a pretty enormous Frankenstein statue in the entrance which is pretty cool. Finally we ended up having a walk around Greyfriars Kirkyard, which is the graveyard that surrounds Greyfrairs Kirk. That was the first time I’ve taken couple’s photos in there and again that was a pretty cool thing to do. It was also surprisingly unbusy inside the Kirkyard although most tourists tend to focus on the bobby (dog) statue by the entrance.

If you do come to Edinburgh Greyfriars Kirkyard is definitely worth visiting. Apparently it’s the most haunted graveyard in the world with a history of stolen bodies. I’ve even been told a necrophiliac visited there once, which is quite frankly horrendous but hey, we do live in a very multicultural / very diverse city so each to their own.

Wrapping this Lothian Chambers McIntyre Suite Frankenstein Wedding up, my time with Frances and Daniel was really short but they were a lovely couple to work and once they loosed up a bit pretty easy to work with.