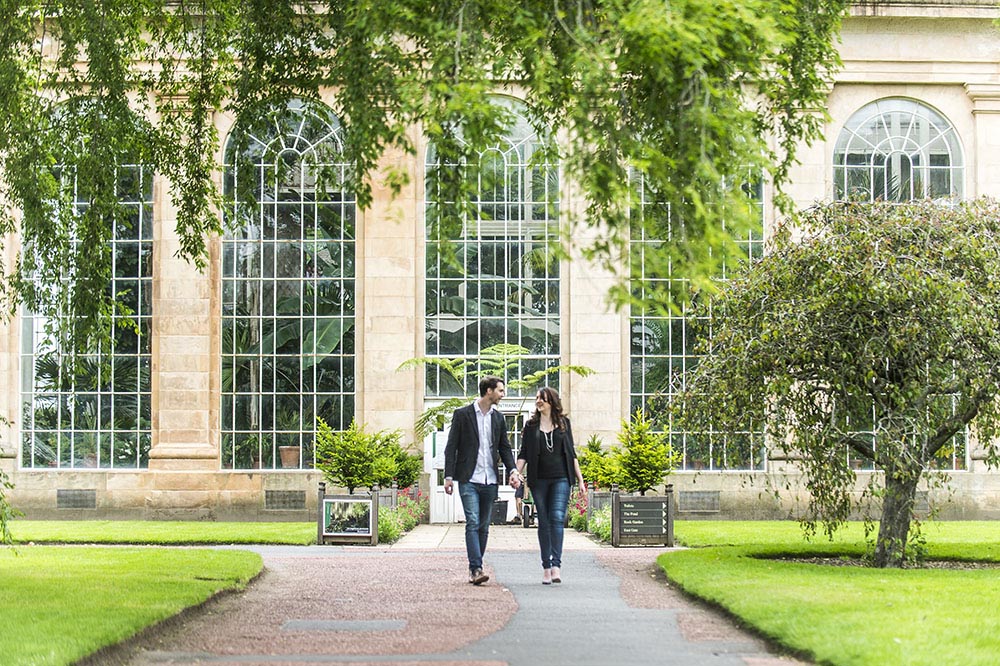 Royal Botanic Gardens Edinburgh Engagement. This September has been one of the weirdest in terms of weather that I can remember. Every year around the 10th to the 12th I do annual group shot for a local pipe band and always around 7pm. I’ve been doing this for around four to five years now and every year it’s been pitch black and pretty cold (maybe 10C). This year I went to the same location where we always do this shoot and this time instead of pitch black and cold it was blazing sunshine and 22C.

This year in Scotland we’ve had a pretty great summer and while it’s starting to get a little colder in the mornings as of the time of this article (10C in the morning, 18 in the afternoon which is still quite warm for here) global warming or whatever you want to call the cause of this great weather is really in full effect. I keep joking with friends that I love global warming (obviously I don’t) but it’s so nice that we’re having this great weather.

As a result of this weather and in light of a wedding I’ve just shot but will be posting online in a few weeks at the Rowantree (awesome venue btw) I did a pre shoot with the couple, Rachel and Martin, at the Royal Botanic Gardens Edinburgh. I’ve gushed about the RBGE (as it’s abbreviated) a few times before and it really is a great venue. The gardens are big, beautiful, fairly peaceful and perfect for taking photos. There was one spot, a wee shelter on the Chinese hillside which I wanted to take photos but on the day of the shoot someone was painting in there so it wasn’t possible to take any photos.

I’ve done a couple shoots with Martin before but this was the first with Rachel and it was really lovely. Again, as mentioned above, it would be sod’s law with the weather, and about half way through the shoot it of course started to rain but Martin and Rachel were happy with the photos taken and they needed to leave in good time so we stopped.

So this was my first engagement shoot at the RBGE. Naturally I’m pretty keen to do a wedding there as on the right day it would be an absolutely stunning venue so if you like this shoot and fancy discussing your wedding there with me, you can contact me towards the bottom of this page.

Here are some of my favourite photos from the day.