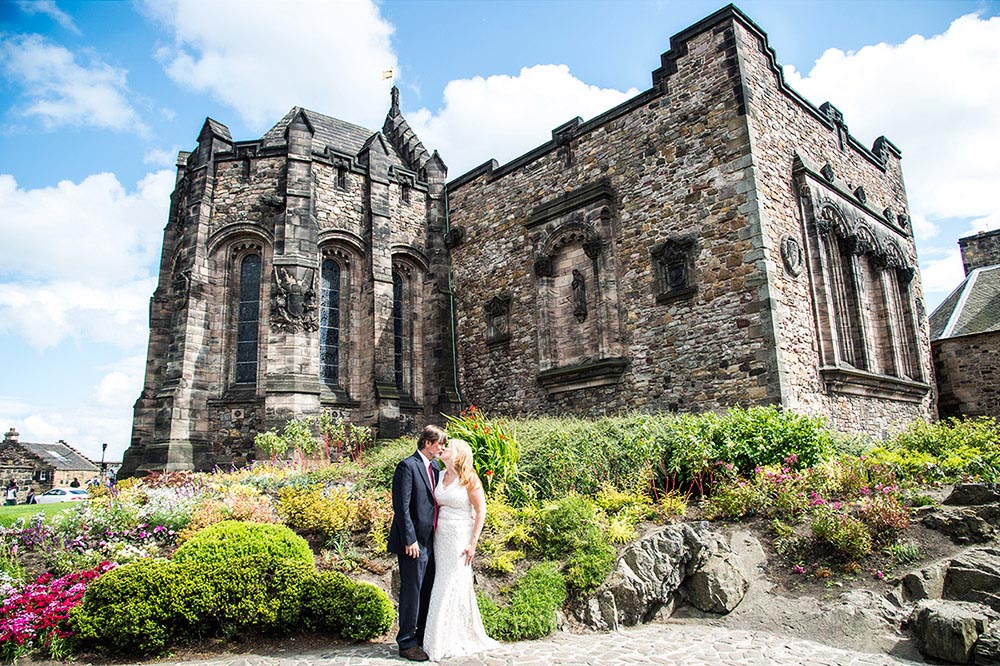 This wedding was really cool though. First of all the bride and groom came over from the USA and were absolutely lovely to work with. Both had great sense of humours and were really relaxed but it helped that we met beforehand for a smoothie and a chat. The weather on the day of the wedding was absolutely gorgeous. This summer in Edinburgh has been simply amazing and at the time of writing this blog post we’re getting some of the hottest weather I’ve felt in the UK in years.

Whenever I’ve photographed weddings at Edinburgh Castle before I’ve always parked in town and walked up to the castle but this time I was allowed to drive into the castle which was really cool. This saved a lot of time and the drive up to the castle was hilarious with all the tourists walking out in front of me. I also had a demonstration car from Pentland Jaguar, in this case a Jaguar XF, to drive for the day which I really want to buy. In the morning Liv and I did a quick sprint over to Glasgow to do some shopping and to grab some lunch then we came back into town, photographed the wedding, then returned the car.

Back to the wedding itself. The wedding was held in St Margaret’s Chapel which is the oldest standing building in Edinburgh, dating back to the 12th century. The chapel itself is interesting to take wedding photos in and is really super dark. The priest on the day, who has covered other weddings I’ve photographed at the castle, was really funny and made everyone laugh. The ceremony was perfect in length and tone and the staff at the castle were great at keeping tourists from entering the chapel. As you can imagine after we exited the chapel there was a huge gaggle of people ready and waiting with their cameras.

Following the ceremony we took some photos around the grounds just around the chapel then the bride and groom went into the Great Hall for their champagne reception.

One thing I’ve found really interesting about Edinburgh Castle is when you take professional wedding photos you’re limited to very specific areas. The castle has wedding function areas across the site so if you get married within the chapel you can only take photos just around the chapel. You cannot at anytime during opening hours take photos in front of the war museum but once you’ve finished the wedding you can snap away. Very interesting.

So that’s about it for this wedding. We had really awesome weather and the couple were equally as awesome. Next week I’ll be posting the first of probably quite a few posts about the Fringe Festival which is arriving in just a few days. After that I’ve got another wedding, a bigger one this time, at Edinburgh Castle and other weddings and events to post in the coming weeks. Fun times!