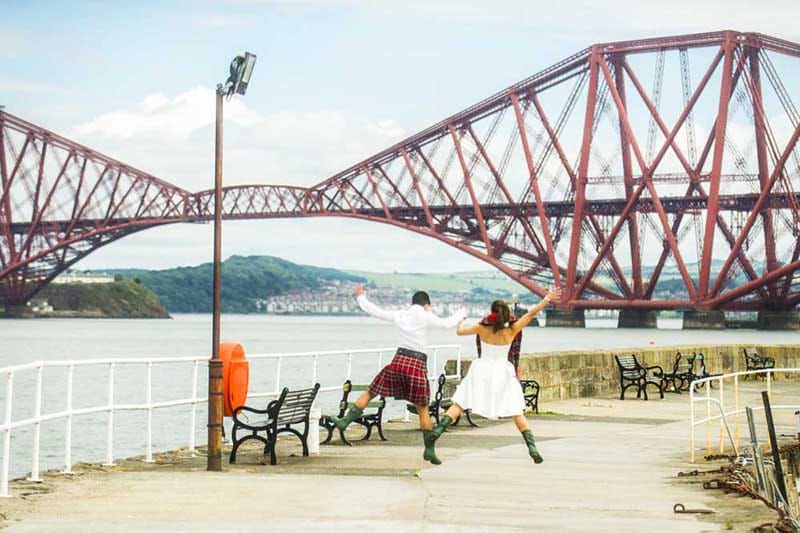 Surprise Tour of Edinburgh. A few weeks ago the weirdest thing happened. I’m a work at home photographer, I don’t have a studio (there’s literally no point for the kind of photography I do) and I had just had breakfast, was still in my sleepwear and the front door rang. A couple arrived at my door looking for “Chris Radley Photography” and said they had flown here from Germany and were wondering if I could take photos of them in some really Scottish locations.

I was pretty shocked that not only had a couple arrived at my door out of the blue and I was even more shocked that they had flown over from Germany. Janni and Suresh are from Cologne and they got married on New Year’s Eve 2016 and decided they wanted to do a tour of Scotland but wanted to have photos taken of them. Cool!

We discussed locations and they asked if we could go to the Highlands but from Edinburgh it’s a good four to five hour drive and I wasn’t willing to go that far. Not only that I don’t really know the highlands. Edinburgh and the Lothians yeah, sure, no problem, but I’ve only been to the Highlands a couple times for a day. Janni and Suresh wanted to take in some popular Scottish backdrops (castles etc) and they did ask about Edinburgh Castle but it’s so damn busy all the time (this year Edinburgh Castle is apparently 40% up on bookings compared to previous years and have stopped taking wedding bookings) so I suggested going to some of my favourite locations. It meant quite a bit of driving but the images we got out of the locations really speak for themselves.

I’ve written about meeting couples for the first time can be daunting but Janni and Suresh arrived on Friday, said they had a wedding dress, a kilt and Hunter wellington boots and I knew the shoot was going to be awesome from this. They came to my home Sunday morning and we started our tour of Edinburgh at our first location, Dalhousie Castle, and we then went to the Forth Bridges, Lauriston Castle and Dean Village. I had thought about going to Old Town but again it’s just so busy all the time and I thought it’d be cool to go somewhere a bit less common.

So how did the shoot go? Really awesome. Seriously, a lot of people could learn a lot just from looking at these photos. Janni and Suresh were so much fun to work with and you really can see they are madly in love with each other. Let’s put it this way, Liv (my wife) looked at the photos and she’s a little impassive towards my photos (I’ve done so many hundreds of couple’s shoots it’s understandable) and she said “ooh, they’re so cute, that’s so nice!” so that really sums up this Sunday Surprise Tour of Edinburgh morning photoshoot for me.

So, if you’ve just got married, or even if you haven’t, and you fancy seeing some really awesome locations around Edinburgh do get in touch. We can go around the common sites; Edinburgh Castle or example, or we could go to some of my favourite spots that I think are infinitely more interesting than more common locations (Edinburgh Castle). Just clicked on the Contact Me button below.

The page you requested could not be found. Try refining your search, or use the navigation above to locate the post.