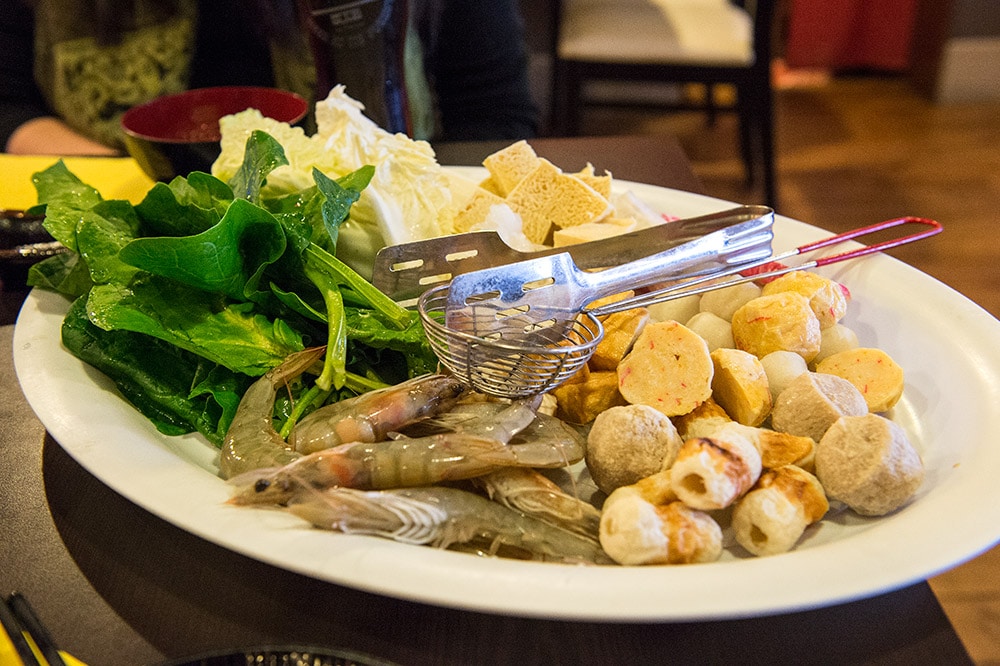 Something a little different today as I’m pretty quiet on the wedding side of things but I thought I’d do a restaurant review.

Both Liv and I love to eat out and we love to eat all kinds of things (in fact we’ll eat almost anything) but one of our favourite things to eat either out at home is a good Chinese hot pot. If you’re not familiar with hot pots they are basically a pot of boiling water which can have broths of various heats (mild, spicy, molten lava hot etc) for which you add raw ingredients and flash cook them. Raw ingredients can include all kinds of fish (mussels, prawns, clams, fish balls etc), vegetables and all kinds of meat (pork, lamb, beef etc). I always think of hot pots as being like a Chinese chowder. They really warm you up from inside to out, perfect for a Scottish winter.

The first time I experienced eating a hot pot was when I was in Chengdu, China. We actually went to the same restaurant Anthony Bourdain (tv chef) went to and Liv’s relatives in China ordered a spicy hot pot and my god it was the hottest thing I’ve ever eaten in my life. Literally for every mouthful of food I was downing a small bottle of ice cold beer, much to everyone’s amusement, but even though it was super hot it was really delicious. To give you an idea of people’s tolerance in Chengdu to hot pots, the pollution levels in Chengdu (and China let’s be honest) are absolutely horrendous and I was told they put mild chillies in babies’ milk bottles. OK!

So back to this review. There are a couple restaurants we go to in Edinburgh for Eastern food. Kanpai serves by far the best sushi/sashima and there’s a couple restaurants that serve really good hot pots that I can’t remember the name of. Yes Sushi which is on Hanover Street right in the city centre offers an all you can eat hot pot and sushi menu for £17.95 per person. Bargain! The price doesn’t include drinks but for the hotpot you can order as much as you want and with the sushi you can order as much as you want but only one portion at a time to cut down on waste. Fair enough! As a note sittings are limited to 2 hours but you can order as many ingredients as you want as many times over within that time.

We’ve been to Yes Sushi four or five times now and it’s been a declining experience unfortunately. The first time we went was last autumn and the most recent time was the 29th January this year. One thing to note the food has always been consistent. The hot pot ingredients are fresh and the sushi again is ok but it’s free with the hot pot so I won’t complain. The first time we visited we took Amelia and it was a great experience. The staff made a fuss over Amelia (which she loved), they regularly topped out the broth for out hot pot and it was great. Ten out of ten stars, 5 gold stars. Great!

The next several visits were fine. Food was the same, staff did their jobs, great, happy with that.

This time though the experience was absolutely disgusting. The food was the same but the customer service made us furious. Liv, my wife, who I went with each time speaks Chinese natively. She’s from Taiwan, it’s her first language, but if she can help it she never speaks Chinese in Chinese restaurants here. Two reasons, one is she feels it’s rude to speak Chinese in a restaurant in the UK and also a lot of Chinese restaurants (Japanese as well but that’s another story) are run by people from Hong Kong. They speak Cantonese which Liv doesn’t speak.

So we walked in, asked for a hot pot in English and sat down. With hot pots you make up your own did with a combination of ingredients (Liv usually makes it up with some herbs, some soy sauce, garlic, an egg yolk and other bits) and just after sitting down Liv got up to make her dip. What then infuriated her was while she was making up her dip she could hear the staff saying really unpleasant things about her in Chinese.

What they said is completely irrelevant but what is relevant was they were loudly and openly slating a customer.

So to sum up Yes Sushi, the hot pot is good (by UK standards), the rest of the food is ok but the customer service absolutely sucks. Doubt we will go back again.

Below are some photos of the restaurant that I took and some of the dishes. 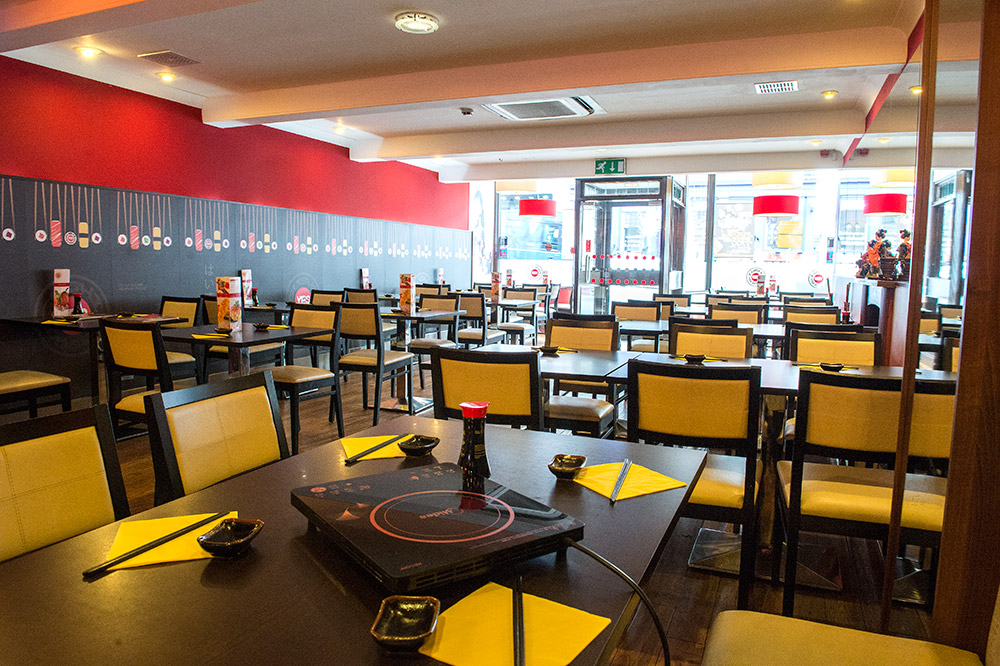 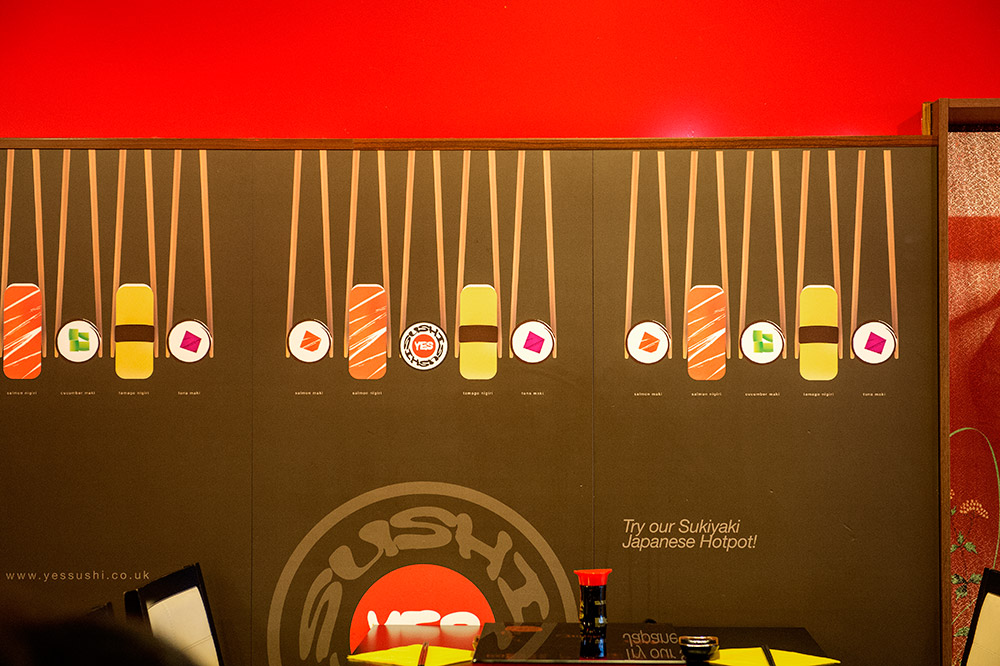 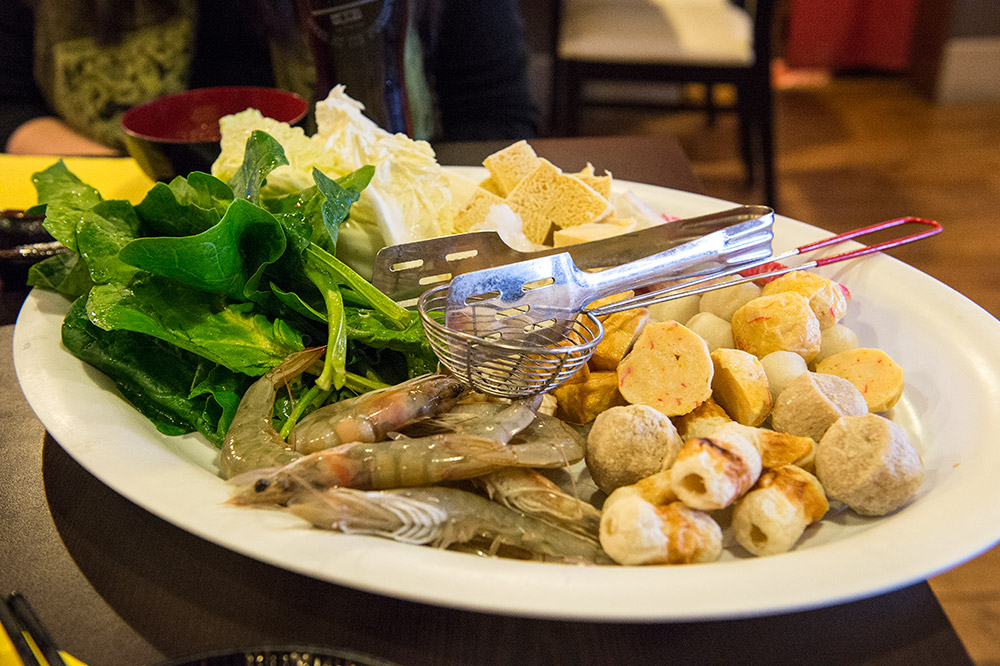 Fish selection. We chose a mixture of lobster and fish balls, prawns, green vegetables, noodles and more. You can order anything you want from the menu within the time limit 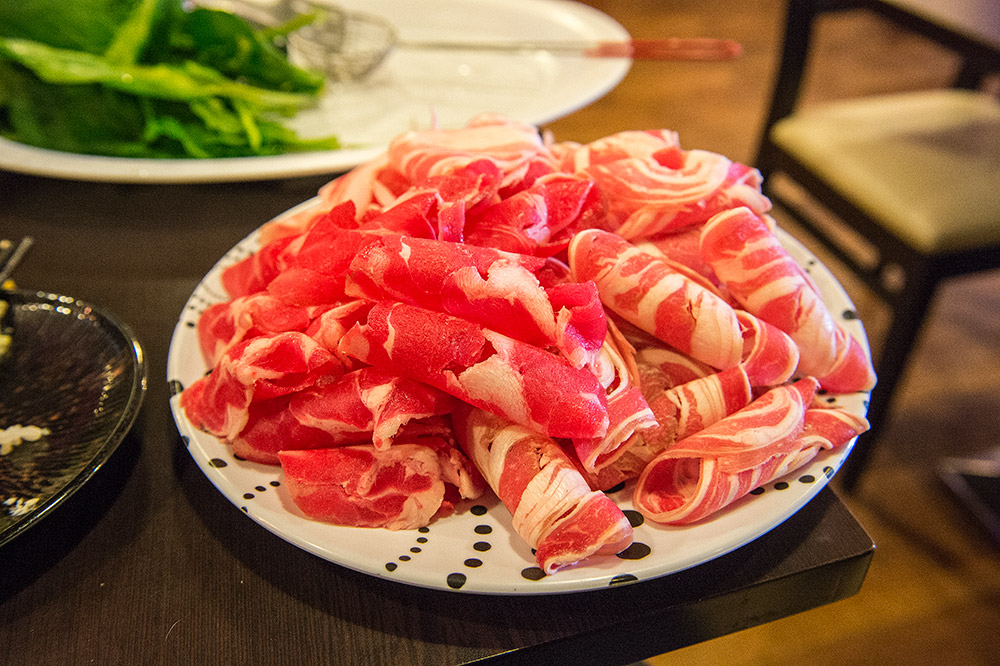 Meat selection. We chose beef, pork and lamb. Not so keen on the beef but the lamb and pork were delicious 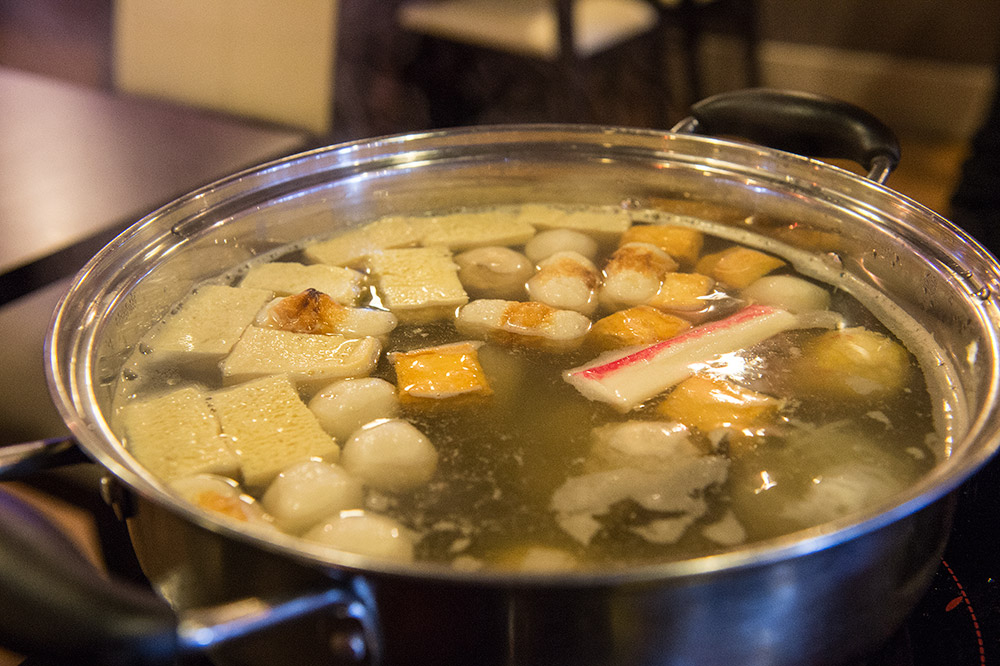 You boil the hot pot then add the ingredients. This was after we added the first batch of ingredients which took a couple minutes to boil 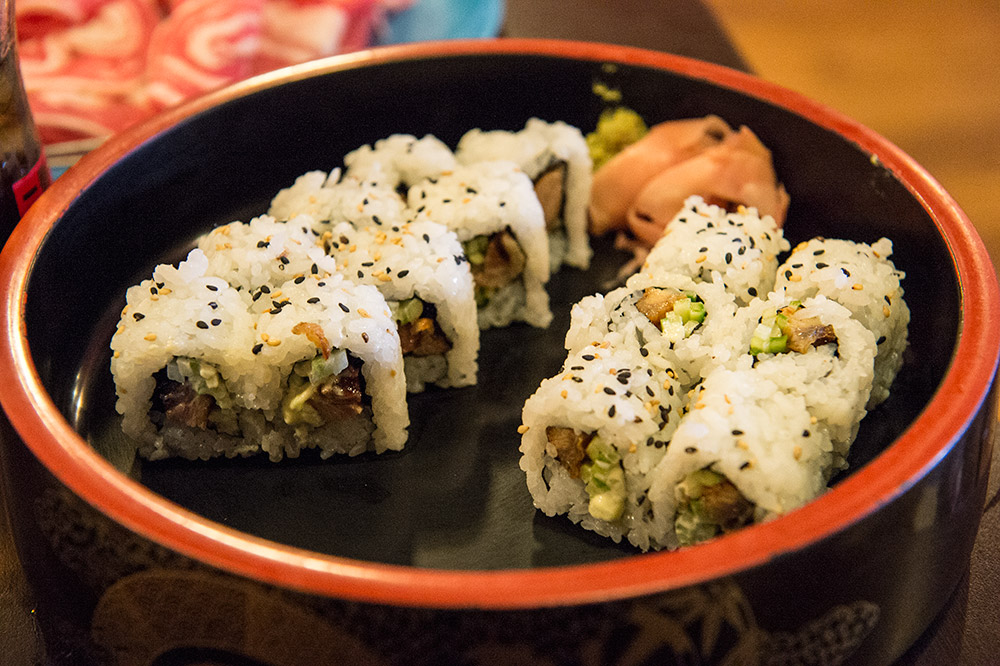 Yes Sushi sushi. We had three rounds of sushi and this was duck on the left and eel on the right. Fairly dry 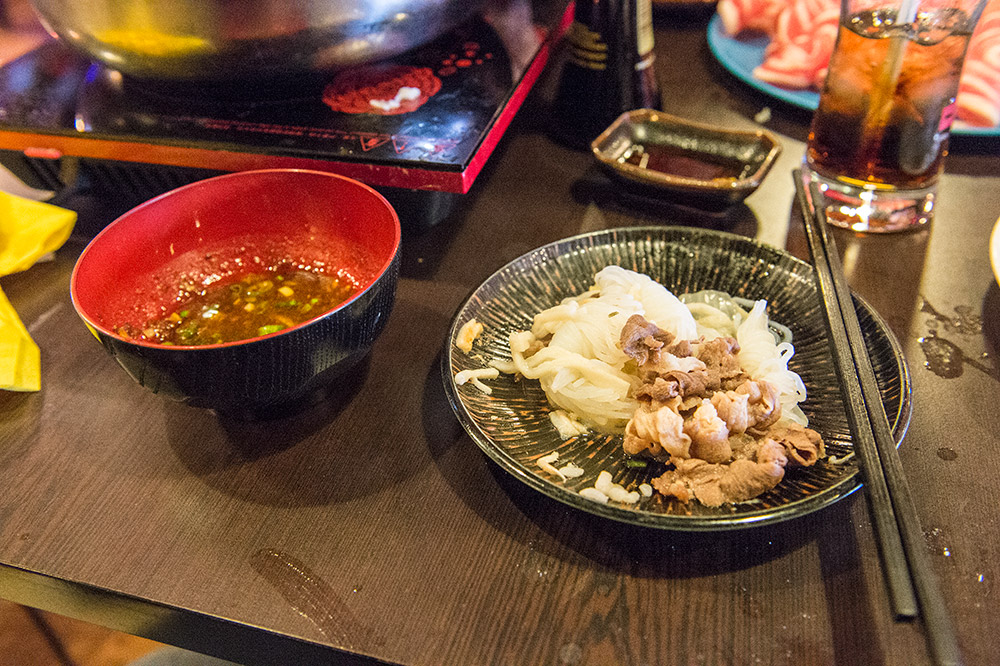 Hot pots aren’t the cleanest thing to eat. Notice dip on the left and some ingredients on the right (noodles, meat etc) 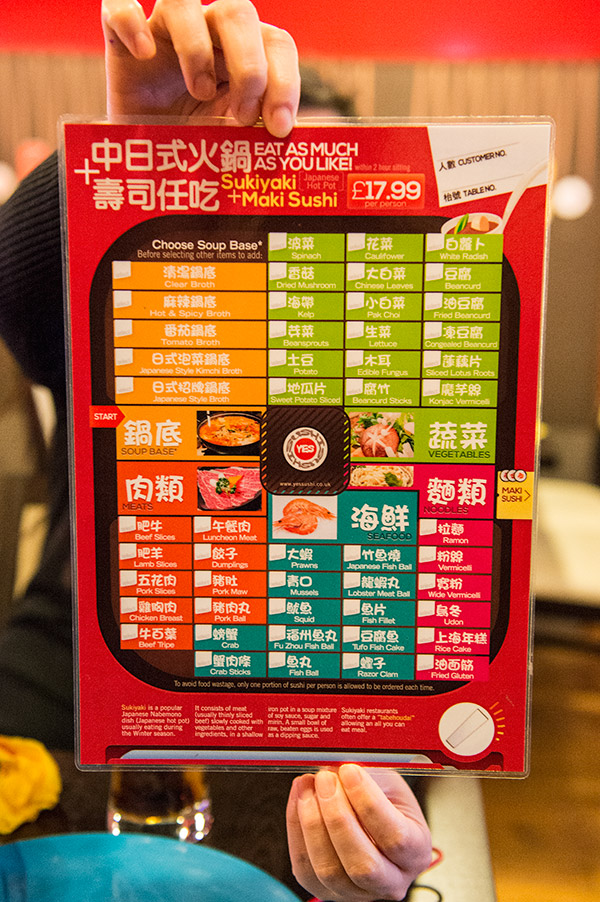 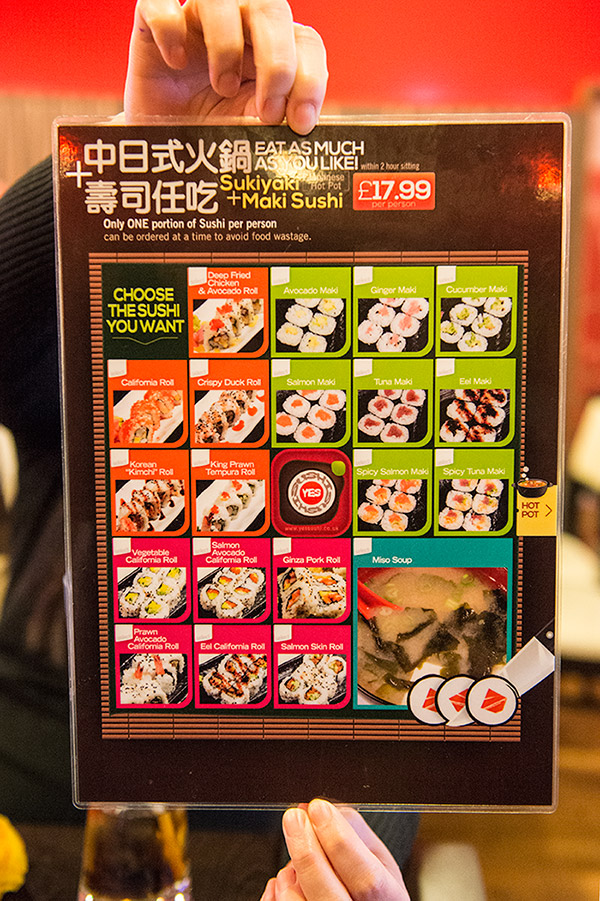